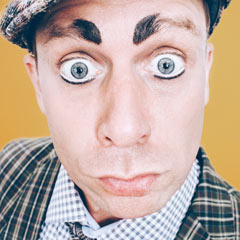 Jean-Ferry began his performance career in Berlin at the tender age of six. In the years that followed he gained a broad range of acrobatic skills, thanks to numerous performances with a wide variety of artistic acts.

He continued his training at the State School for Ballet and Circus Arts in Berlin, from which he graduated. During his studies at the school he already earned engagement at such distinguished venuesas the Friedrichstadtpalast in Berlin, the City Theatre of Dusseldorf, the “Deutsches Theater” in Berlin, and the Schmidt Theatre in Hamburg.

After graduation Jean-Ferry went swiftly on to enthrall his audiences as one half of the acrobatic-duo “Swing Mortales”: with engagements in amusement parks, circuses, and countless variety shows. Additionally, he featured in several theatre productions: such as the musical show “30-40-90° – open round-the-clock” in the “Theater des Westens” in Berlin.

His ever-growing attraction to the craft of ladder-acrobatics led to the development of the act “The Art of Ladder Acrobatic”. Since it´s inception Jean-Ferry has performed this fast-paced show in a wide number of variety productions, including appearances in the CasinoSan Remo (Italy), the circus production „Salto Natale“ (produced by Rolf and Gregory Knie in Switzerland), the Casino Royal in Baden-Baden (Germany), and the GOP Variety. Besides his variety engagements, Jean-Ferry has proved his artistic excellence in the world of the corporate event and gala market – with an enviable client list that includes Circus Roncalli, FC Bayern München, Siemens, Vodafone, Allianz and Mercedes-Benz.

In 2006, after five years of training, Jean-Ferry brought another highlight to the stage with his “comedy trampoline”. The trampoline quickly became a steady part of Jean-Ferry’s stage program. His uniquely artistic comedy act was a guest at, for example, the Friedrichsbau Varieté Stuttgart, Radio Ton Gourmet Palast and numerous event productions.

In 2008, Jean-Ferry integrated more comedy renditions into his program, for example Multiplying Bottles. His continuous development of the clown character led to the creation of further acts such as Comedy Magic and Comedy Animation.